The Global Gender Gap Report 2020 by World Economic Forum2 reports that the overall global economic gender parity stands at 57.8% suggesting it will take 257 years to close the gender gap in the economy.

India has one of the lowest female labour force participation rates in the world and ranks 145 out of 153 countries. Additionally, the average wage/salary earnings of females is 78%3 of males among regular wage salaried employees in rural and urban India. 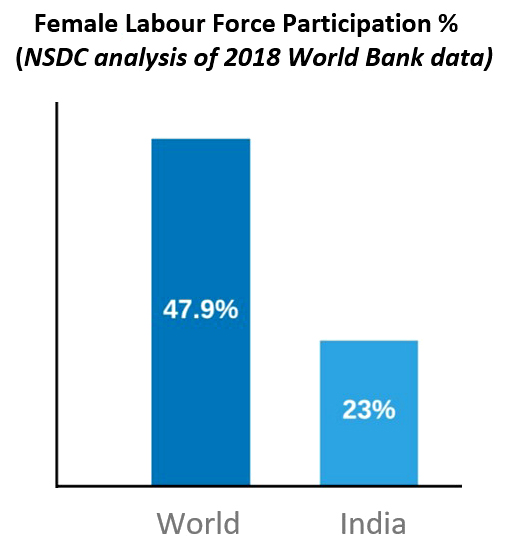 While this data pertains to only two genders – men and women, there is no comprehensive data- worldwide or India, that takes into account the gender spectrum while discussing the economic gap. A 2008 study4 in the United States, exposed that transgender males reported a slight increase, and transgender females reported a 32% decrease in their salaries.

A new narrative for action needs to be created that is cognizant of gender, beyond the binary distinction, into policy initiatives. Gender Mainstreaming could help in supporting this new narrative.

What is Gender Mainstreaming?

Gender mainstreaming5 requires the integration of a gender perspective in the process of policy making and addressing the issue of representation of women and men in a given policy area. It makes public interventions more effective and ensures that inequalities are not perpetuated.

Until now the focus of skill development was on increasing the number of women trained. Now that almost 50%3 of the candidates trained under PMKVY are women the focus of skilling can now shift to bridging the learning to livelihood gap. This is where the Gender Mainstreaming Framework could contribute with five Gender Sensitivity (GS) levels corresponding to the NSQF level supporting the different degree of knowledge, behavior and practices and suggested policy interventions (Box 1). 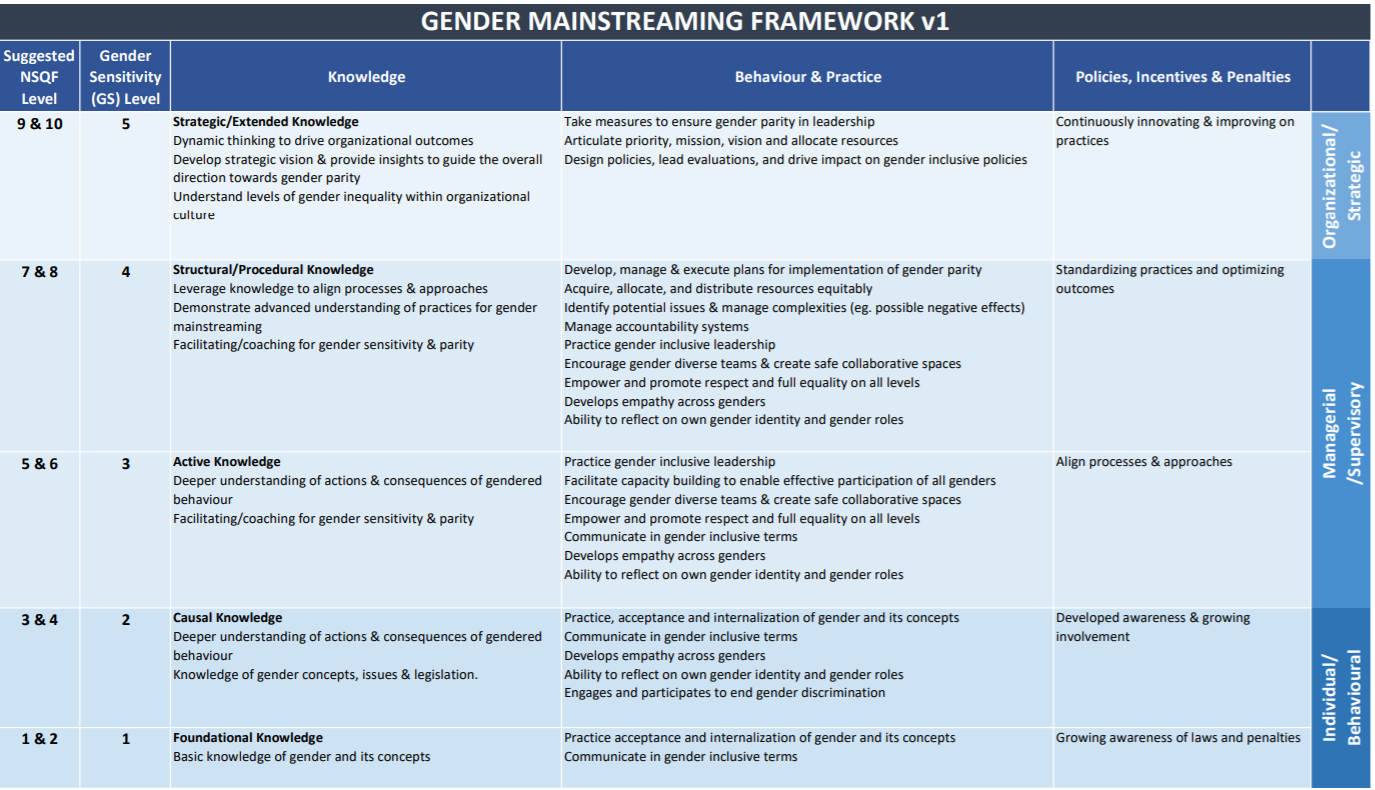 Supporting Gender Sensitiveness through the Framework

The Gender Mainstreaming framework drives the development of gender sensitive Qualification Packs (QP) and Model Curriculums, reflected in the performance criteria (PC) and key learning outcomes (KLO) respectively. This change can be as simple as using gender neutral language. E.g. older QPs are male centric – they predominantly use male pronouns. Then, male and female pronouns were utilized but this excluded the third gender. Now QPs are completely gender neutral.

Further, given below are sample PCs and KLOs created using the framework.

Training materials and assessments will be created based on such indicators. Thus, skill training shall provide opportunities to individuals to increase their gender awareness. The overall aim is to encourage just and inclusive workplace practices through changes in behavior, attitudes and policies.

While this framework shall aid in creating the base for training delivery, what could be the other applications for the Gender Mainstreaming Framework in the skills ecosystem?